Colour doesn’t have to be flat paint

An exciting summary of her lecture during the IMM Cologne in January 2020 on the topic: "Colour doesn't have to be flat paint! Current Colour and Material Trends for the Interior 2020+".

Creative use of colour often has to bear the reproach that the effect is childishly naive and simply too colourful. Even for a successful use of colour, a kind of "justification" is often required. Design-oriented end consumers are often affectionate with architecture and have a largely uncoloured cliché in their minds of classical modernism, i.e. both Bauhaus works and those of Le Corbusier. And that is black and white, possibly flanked by a little bit of grey and beige; this includes buildings made of concrete, glass and steel, furniture with chrome and black leather. If something becomes too colourful for the customer, it is rarely good. Restrained material colouring, on the other hand, is not only tolerated but usually appreciated, appears attractive and is far less harsh than the "flat wall colours" often frowned upon by architects. There are great creative arrangements of colour and material that may serve as examples for inspiration.

For some years now, innovative opportunities for the use of coloured materials have been gaining ground, puristically combined with so-called "neutral colours" or even more boldly combined with other bright colours. (Fig.1) For example, taps in kitchens and bathrooms used to shine almost exclusively in polished chrome, while a visit to the last ISH (World’s Leading Trade Fair for Water, Heating, Air Conditioning) in Frankfurt showed that almost all major tap manufacturers now offer PVD coatings in finely graded colour ranges, from chrome and nickel through slightly greying French gold to rich yellow gold, which is more popular in Eastern Europe and the Arab States. It goes on with rose gold, bronze and deep black. And all these surfaces are offered polished, brushed and cloth matt as a matter of course, some of them now even on larger objects such as kitchen sinks. (Fig.2)

PVD stands for Physical Vapour Deposition, a fairly new process in which metals are deposited in a vacuum on surfaces of rather small products. The method was initially used in mechanical engineering (Fig. 3) and for medical tools, for example to make bone or dental drills even harder and almost completely free of both wear and abrasion. The durability is extreme, nothing peels off. Metals in all colours and even surfaces with rainbow gradients are produced using this method. The process is decorative and highly functional, unfortunately still relatively expensive in terms of interior use. But, compared to precious metals such as gold and platinum, it is inexpensive when it comes to jewellery work or the watch industry.

The iridescent rainbow colouring was brought together with glass in an organic form in the work of the British designer Tom Dixon, and it is precisely this organic association that is also fascinating in the case of the handmade, quail egg pink speckled ceramic bowl set from Australia. (Fig.4)

Rado, a high-end manufacturer of Swiss precision watches, went one step further than PVD. For years, the brand has carried out meticulous research to be able to produce not only metallic surfaces but also brightly colored, extremely flat case constructions and watch straps made entirely of ceramic. The goal was extremely ambitious, especially since the material is fired at high temperatures of around 1400 degrees Celsius, without the pigments being allowed to change their color. The exact choice of colour was very important and so it seemed obvious to consult the experts at Les Couleurs Suisse for the final specification. (Fig.5)

A Rado True Thinline can confidently be described as an extremely high-quality statement of the spirit of the times, available as a limited special edition in nine selected colors of the 63 shades of the Architectural Polychromy by Le Corbusier. The exact same colours, as the orange vif (4320S) for example, can of course also be used by design-oriented customers for interior design, whether as a ceramic wall or floor tile, as a paint, furniture surface or even as a light switch. (Fig.6)

But the switch classics are also very elegant in black, especially when placed on coloured walls. (Fig.7 left) And between differently coloured walls or rooms, so-called colour breaks are sometimes needed, but they don’t have to be boring. Trend-oriented, but at the same time almost timeless, a nuance around sage or eucalyptus would serve exactly this purpose. (Fig.7 right) Quiet but not boring, relatively neutral but not impersonal. Sage, a slightly grayish pale green defined by a major international chemical company as the color of the year 2020, also appeared in a classic context. To celebrate its 200th birthday last year, the world’s best-selling and probably best-known coffee house chair, a design classic by Thonet, was reissued in four two-tone versions. One of them is in a matt sage colour in combination with blond stained beech and the so-called Viennese weave as seat.

Viennese weave or cane weaving, as it is called in English, usually consists of a kind of rattan cane or rattan fabric, the basis is a natural and relatively fast growing material. It is not only suitable for furniture, but even as a high-resolution photo collage for ambitious wall design. (Fig.8) The warm material nuances can wonderfully act as a balance to current peacock colours from the cool quadrant of the colour circle and skillfully combine tradition with trend. It is particularly remarkable that specialists can even restore the material fabric, sometimes creating completely new effects in the combination of colours and materials. (Fig.9)

Cain webbing was an already interesting topic for Le Corbusier. And this in connection with Chandigarh, a planned city in northern India that, the great master conceived almost all by himself, developing the entire city plan, including the government district and furniture, together with his cousin Pierre Jeanneret. The furniture of the government buildings was designed on site by P. Jeanneret and is for the most part firmly screwed into the room. Some originals appear in auctions today and even fit into the modern ambience of well-known influencers. (Fig.10) Of course, it would be more advantageous to purchase the furniture in the form of licensed new editions, which are produced in the highest quality in the spirit of the two famous cousins since 1960 by the Italian high-end furniture company Cassina.

Le Corbusier is well known to most lovers of design and architecture for his furniture and his buildings. For decades, he spent half a day painting and intensively studied the subject of colour. At the beginning of his career, he created poetic patterns and sketches, completely different from what one would expect from one of the greatest representatives of classical modernism. Some of them are playful and have a great, almost romantic charm, as if they were magical designs for snow globes by Koziol. (Fig.11)

In the 1950s, the drawings were already more rectangular, but still small and full of symbolism. For example, one of the designs was realized as a mural painting in the Chandigarh court. (Fig.12) And by looking further into the assembly hall of the parliament, one discovers – also rather atypical for the work of the great architect – a dome-like round interior with lamps, furniture and acoustic elements designed especially for this purpose, dark as thunderclouds. It is impressive and almost dramatic how the mighty grey over head combines with yellow and red to create the greatest possible colourful-uncolourful contrast. (Fig. 13) The main entrance to the building is also remarkable: The enamelled steel door was designed by LC, manufactured in France and – not only spectacular for the 1950s – flown into India. Important and striking is the bright yellow, which in Hinduism stands for the deities Vishnu and Krishna. They wear yellow clothing and thus symbolise knowledge, competence and spiritual development. It is logical that this strong yellow nuance, admittedly the last of a total of 63 colours, has found its way into Corbusier’s 1959 collection extension. (Fig.14)

But no matter how significant it may be, we don’t want to get stuck in design history. Let’s take a brief look at social media, bloggers and influencers, who can also provide inspiration for our approach towards colour and material. Take a certain Mrs Fenty, for example, better known to many as Rihanna. With great accuracy and precision, she has introduced 40 to 50 nuances in make-up for the cosmetics industry, first for Dior, then for her own label Fenty, thus sensitising countless female customers to the finest colour differences. It did not stay with MakeUP for long. A little later, Rihanna successfully created fashion and lifestyle accessories such as sunglasses for Dior and Fenty, both of which are subsidiaries of the French luxury goods group LVMH. Here, there are models whose constructivist form is reminiscent of Laszlo Moholy-Nagy and Bauhaus, but which obviously fit perfectly into the here-and-now or the future through the dichroic effect of the lenses.

There are also outstanding examples in architecture of the dichroic, i.e. two-tone depth effect of glass that changes depending on the viewing angle. Let us name only three: MindValley’s office in Kuala Lumpur (Fig.15+16), the Aesop store Miami (Fig.17) and the famous Saks Fifth Avenue department store (Fig.18), opposite Rockefeller Center in N.Y.C. The Dutch architect Rem Koolhaas and his office OMA (Office for Metropolitan Architecture) were in charge of the much acclaimed renovation of the department store empire. The main eye-catcher is the escalator system with intelligent colour effects, created by a film coating on glass, which blends in perfectly with the historical ambience. But the terrazzo floor covering there is also an attractive trend material, combining history with the future and, thanks to the different colours of the sprinkles, providing an ideal starting point for the overall colour scheme.

Innovative solutions such as colour combinations with PVD palette or dichroic-coated effect glass and historical material such as Viennese braiding or terrazzo are just a few of the countless possibilities to combine colour cleverly, purposefully and not at all naively with material use. Colour is so much more than just flat paint! It is your and our task or rather the chance to develop creative solutions and to make historically proven products future-oriented by creative colour and material combinations. 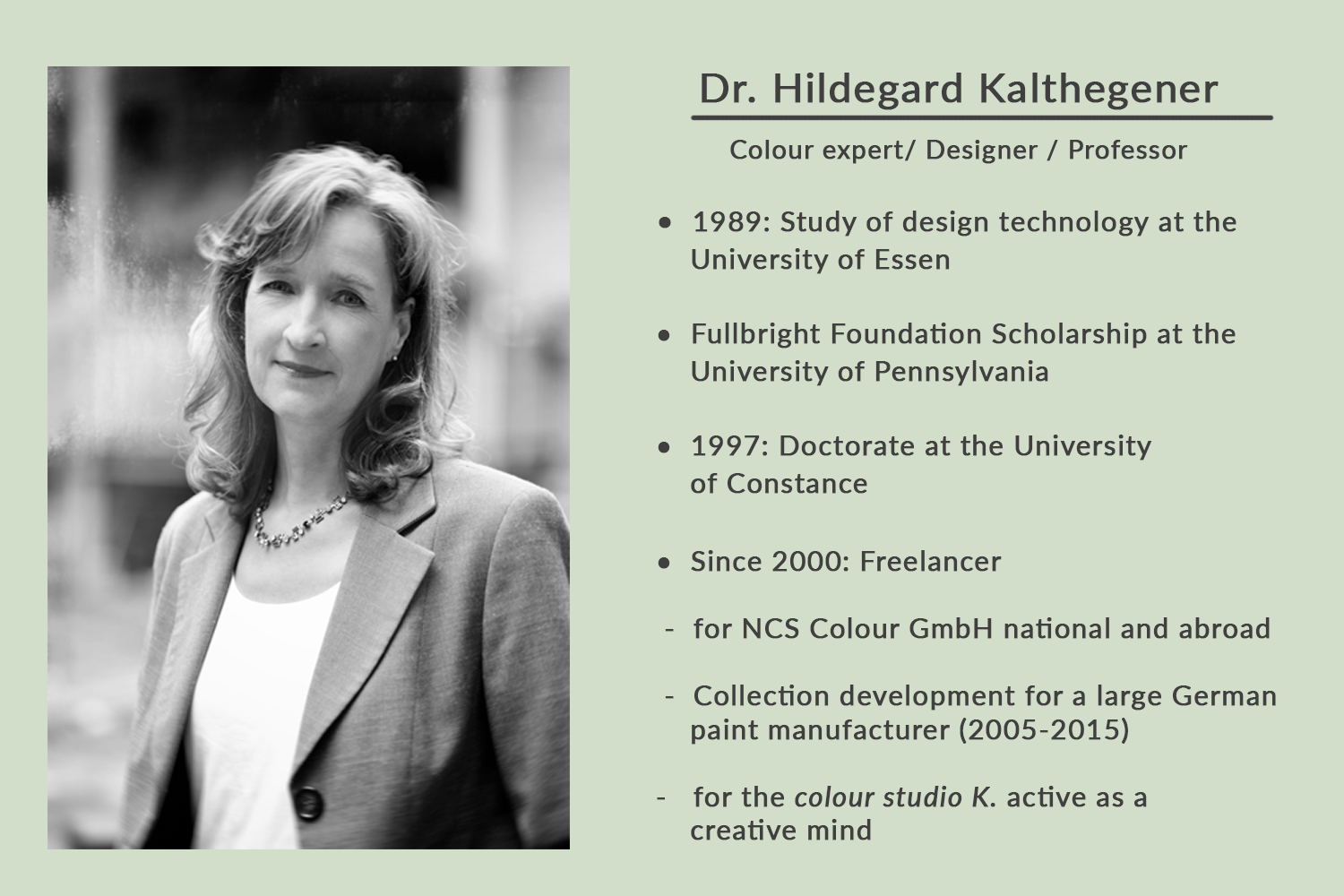 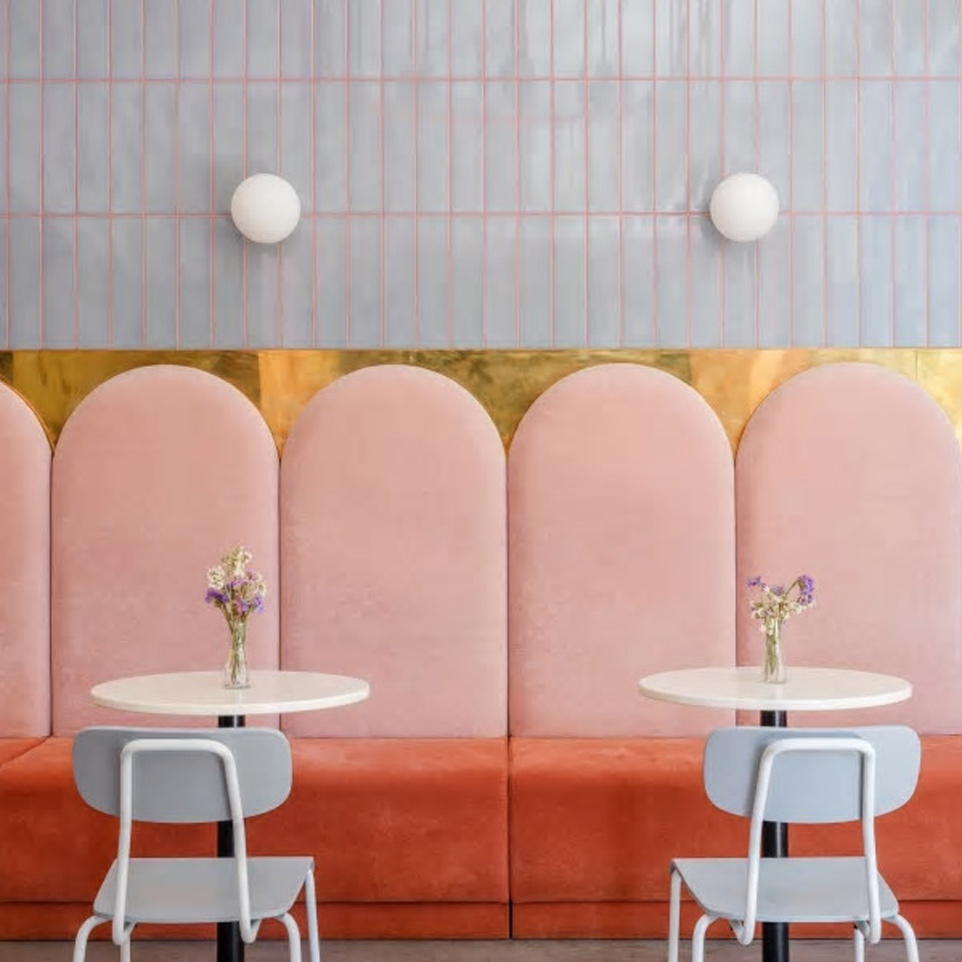 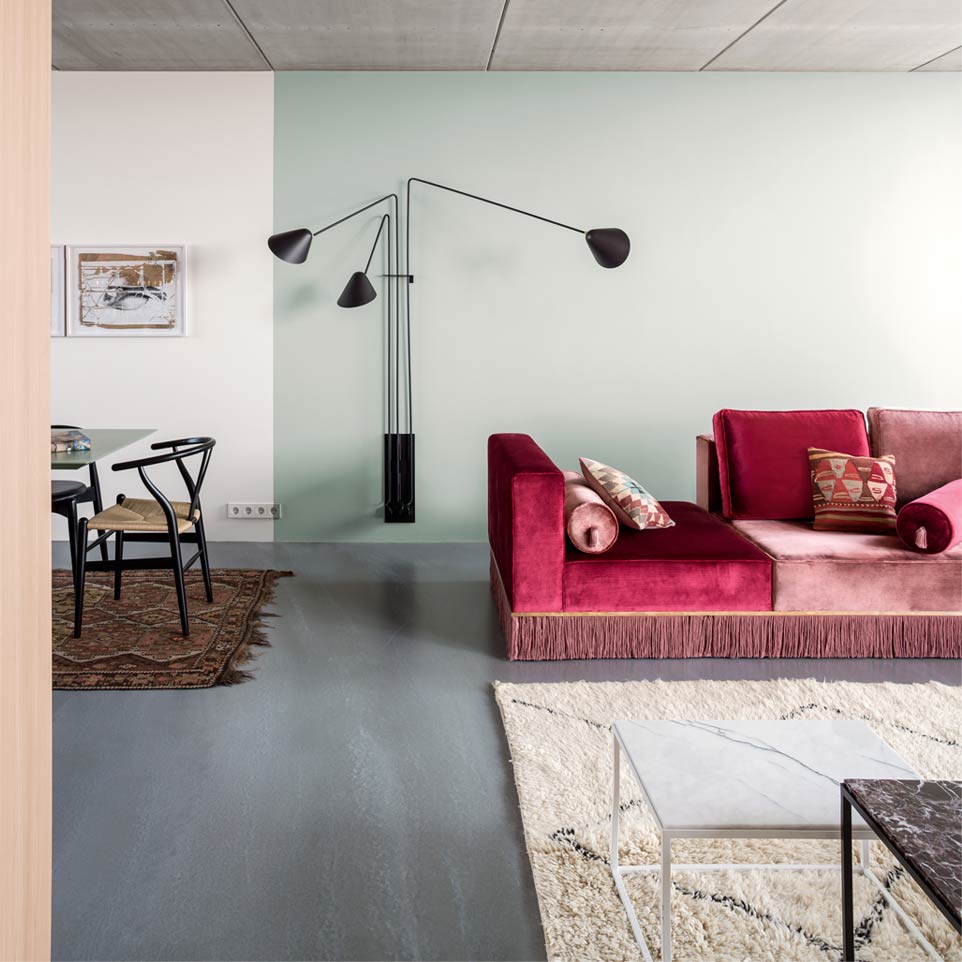 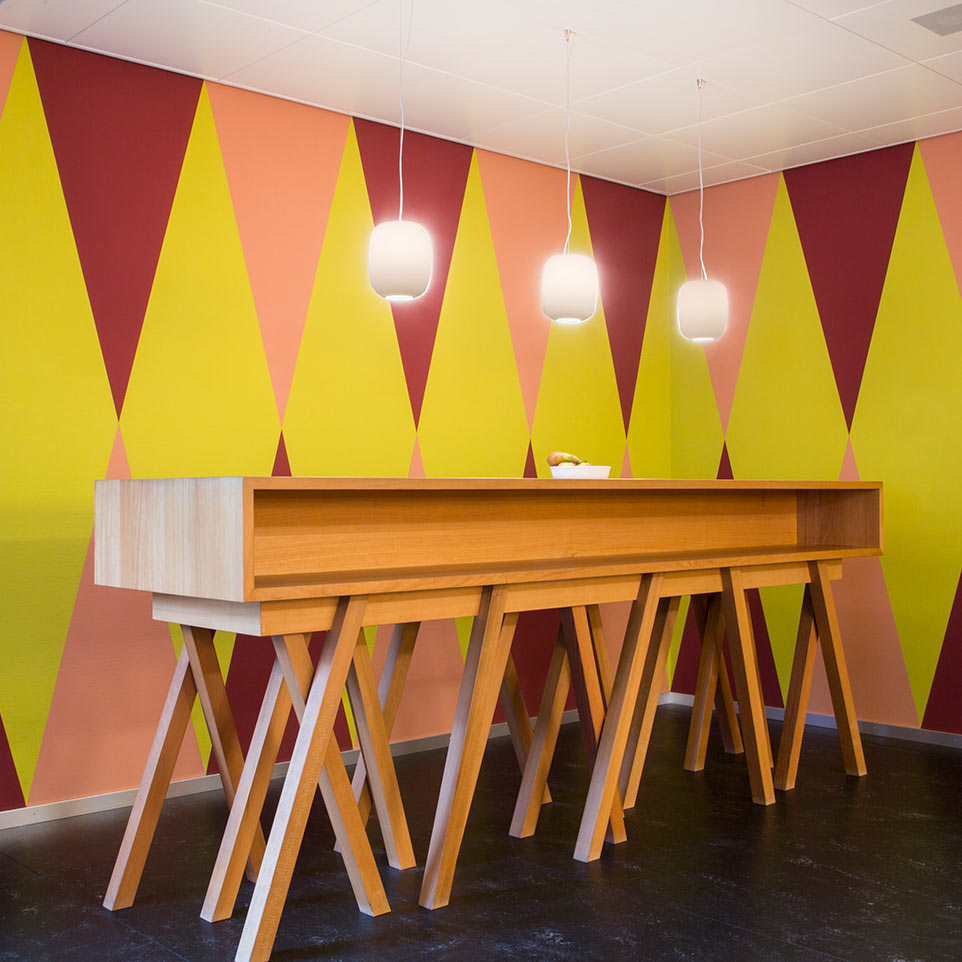